Walnut Commons consists of nineteen condominium units in a three-story building to Santa Cruz highest standard of Green Building with underground parking and storage. In addition to our privately-owned space, we share an outside deck garden and community space on the ground floor which includes a gourmet kitchen, dining room, living room and play room. There are also guestrooms, shared laundry room and subterranean parking garage. 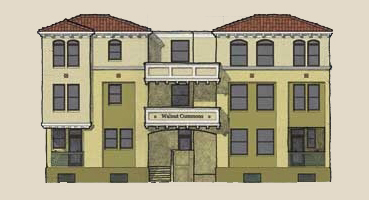 You may download a Floor Plan (3 pages) or Exterior Views (2 pages) in PDF format.

Author of three books on cohousing, Charles Durrett is the leading designer of cohousing communities in North America and credited (with his wife) for coining the term “cohousing”. His work has been featured in The New York Times, Wall Street Journal, The Economist and Architecture and Architectural Record magazines. Among many honors he has received the World Habitat Award by the United Nations and Mixed Income Development Award from the American Institute of Architects. He lives with his wife and partner Katherine McCamant in Nevada City Cohousing in northern California.

Bob Hightower has worked on a variety of projects, notably historic rehabilitations and multi-family housing in San Francisco. As lead architect on the Mountain View cohousing project, Bob has gained noteworthy expertise in cohousing design.